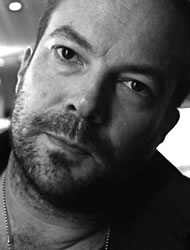 Director/writer Simon Rumley burst onto the film scene with his tragi-horror THE LIVING AND THE DEAD, winner of 15 awards. His sociopathic study of sex, love and revenge RED WHITE & BLUE, has become an international cult favourite, as has his equally disturbing tale of consumer addition, FASHIONISTA.

His most recently released films are the Nic Roeg produced biopic CROWHURST, about the tragedy-beset yachtsman Donald Crowhurst, which has garnered rave reviews, and gangster thriller ONCE UPON A TIME IN LONDON.