The Lockdown Hauntings Out May 3 2021 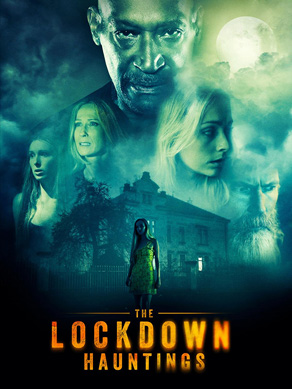 20th April 2021, London UK – Strap yourself in for a Covid-era creep-out par-excellence, with THE LOCKDOWN HAUNTINGS, from acclaimed director Howard J Ford, (The Dead, The Dead 2) and Evolution Pictures, released 3rd May on digital platforms in the UK and Ireland.

Set at the beginning of last year’s lockdown, THE LOCKDOWN HAUNTINGS is a fast-paced mix of paranormal horror and detective thriller, that sees the evil spirit of a dead serial killer stalking his victims who are stuck in their homes alone during the Covid epidemic.

Award-winning director Howard J. Ford, (who directed/co-wrote zombie hits and FrightFest favorites The Dead and The Dead 2) pulls out all the stops to deliver a jolt-filled, creepy and highly entertaining shocker, despite having to make the film during the lockdown restrictions – not that you’ll notice, as you’ll be too busy hiding behind the sofa during the running time. Ford’s assembled a fantastic cast, including horror legend Tony Todd (Candyman, Hatchet), Angela Dixon (Never Let Go), Heather Peace (Silent Witness), Jon Campling (Harry Potter) and Sarah-Jane Potts (Kinky Boots).

If you were gripped by last year’s nerve-rattler Host, and spooky classics like Paranormal Activity and Sinister, then THE LOCKDOWN HAUNTINGS will be sure to chill you to the core!

“How do you stop a serial killer who’s already dead?”

SYNOPSIS: During a global lockdown the streets are empty, free from activity of humans, it is not just nature that takes advantage of this unprecedented time. Spirits are free to roam, some with evil intent and one, a notorious serial killer, is back from the dead.

Can the paranormal experts and detectives piece together how to prevent more young women, isolated and alone during lockdown, from becoming another victim of The Lockdown Hauntings?

THE LOCKDOWN HAUNTINGS IS RELEASED ON DIGITAL ON 3rd MAY. WATCH IT ON APPLE, AMAZON, GOOGLE, SKY STORE, VIRGIN AND MORE.

Since launching in 2013 Altitude Film Distribution have proudly supported talented filmmakers and given their films the dynamic and bold releases they deserve.

To date Altitude have championed over 100 films, ranging from the Academy and BAFTA award winners, Moonlight, Rocks, Minari, 20 Feet From Stardom, Amy, I Am Not Your Negro and through to critically acclaimed The Florida Project, Diego Maradona, Lady Macbeth, Beast, The Rider, Whitney and more.