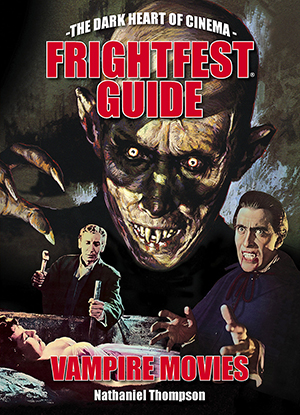 FrightFest and FAB Press once again join forces to launch THE FRIGHTFEST GUIDE TO VAMPIRE MOVIES, which goes exclusively on sale during Arrow Video FrightFest 2022, Aug 25 – Aug 29. Both the author Nathaniel Thompson and author/critic Kim Newman, who wrote the foreword, will be present to sign copies at the Cineworld, Leicester Square. Dates and times to be confirmed.

This is the sixth edition of the FrightFest Guides, the latest in a series of successful, wide appeal books for both the curious spectator and the cult connoisseur. Previous genres covered include Exploitation Movies, Monster Movies, Ghost Movies, Werewolf Movies and Grindhouse Movies.

For centuries, mankind has been chilled by tales of vampires. A fixture of literature, art, and folk tales, the vampire was a natural early choice for a movie monster at the dawn of cinema and has remained popular ever since as the screen’s most enduring and sexually charged nightmare figure.

Within these bloodstained pages, you’ll discover all the vampire icons, from Bela Lugosi and Max Schreck’s pioneering fiends to the heyday of Hammer Films, but that’s just a sanguinary taste of what’s to come as you explore macabre offerings from Hong Kong, India, Italy, France, Germany, Japan and many more countries across the globe.

It’s all served up on a blood-spattered silver platter by author and film historian Nathaniel Thompson, who also delivers a globetrotting introduction to the history and evolution of vampire cinema, from the silent era to the modern age of undead heartthrobs and vampire assassins.

Sweetening the bloody deal is a foreword by legendary writer and monster expert Kim Newman, who dragged vampire literature into the daylight of the modern age with his Anno Dracula series..

The FrightFest exclusive hardcover will be on sale for just £25, and people not attending in person won’t miss out as they have the option to pre-order the book from www.fabpress.com — pre-ordered books will ship the first week of September.

The Paperback publication date is 18 October 2022.

For review copies – either pdf or physical copies – contact:

THE AUTHOR — Nathaniel Thompson has been a contributing writer for Turner Classic Movies for 15 years, and for the past decade he has written for the Academy of Motion Picture Arts of Sciences and has worked behind the scenes at every Oscars ceremony during that period. He has been running the film review website Mondo Digital since 1998 and wrote the four-volume DVD Delirium series of books for FAB Press. He has also recorded more than 150 DVD commentaries, primarily focusing on horror and arthouse cinema.

FOREWORD — Kim Newman is a critic, author and broadcaster. He is a contributing editor to Sight & Sound and Empire magazines. His books about film include Nightmare Movies and Kim Newman’s Video Dungeon. His fiction includes the Anno Dracula series and Something More Than Night. His website is www.johnnyalucard.com.  He is on Twitter as @AnnoDracula.

Since launching with its seminal publication Flesh And Blood (the source of the FAB acronym) in 1993, FAB Press, publishers of books for cult connoisseurs, has gained respect among its loyal customers and knowledgeable members of the book publishing industry alike. FAB Press has been working with FrightFest since 2016. This is the sixth volume in the FrightFest Guide series of books.

FrightFest is the most prestigious horror fantasy movie event in the United Kingdom since 2000. Created by Paul McEvoy, film exhibitor Ian Rattray, film critic, international journalist, author and broadcaster Alan Jones, and veteran PR man Greg Day, the main FrightFest event takes place annually over the August Bank Holiday in London. They also have their an annual three-day event at the Glasgow Film Festival and own distribution label, FrightFest Presents, in partnership with Signature Entertainment.