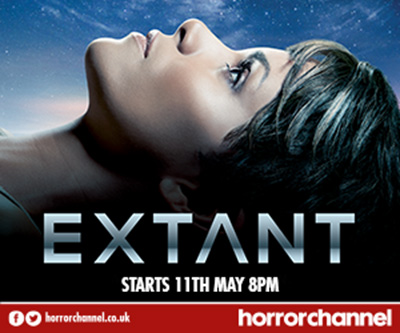 Horror Channel will be continuing its commitment to bringing cult & classic sci-fi to its audience with Seasons 1 & 2 of the CBS Studios / Amblin Television production of EXTANT, staring Halle Berry as astronaut Molly Woods, who returns home to her family, inexplicably pregnant after 13 months in outer space on a solo mission. First aired in 2014 and Exec produced by Steven Spielberg, the futuristic sci-fi thriller was written by rookie Mickey Fisher, whose initial script of Extant won a  screenwriting contest. before coming to the attention of Amblin and Spielberg.

Astronaut Molly Woods (Halle Berry) returns home from a 13-month solo mission in outer space to discover she’s pregnant. She tries to reconnect with her husband, John (Goran Visnijc), a robotics engineer who has created their son Ethan, a prototype android called a “humanich”, (played by Pierce Gagnon), but relationships are put under dangerous strain when Molly’s mystifying experiences in space lead to events that will ultimately change the course of human history