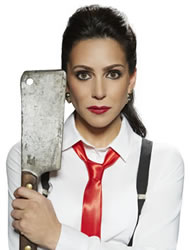 Described as “one of the iconic women of horror”, actress, presenter and all-round movie buff Emily Booth is a presenter for the Horror Channel and has written for various publications. She produced, wrote and starred in the short film SELKIE and has recently starred in SHED OF THE DEAD and FROST BITE.