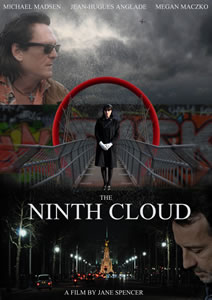 Set in 90s London, THE NINTH CLOUD tells the story of Zena (Megan Maczko), who, trying to escape the grief of her family being killed in a plane crash, becomes infatuated with fellow American Bob (Michael Madsen), an enigmatic but failed poet, who has taken up residency in a Hackney squat. Searching for hope through Bob’s weird artistic visions, Zena sexually and emotionally collides with an array of angst-ridden IT girls and debauched men including Brett, a narcissistic socialite (Leo Gregory), and Jonny, a drink-drowning musician (Jean- Hugues Anglade). But it is to the unattainable Bob that Zena is fatally drawn to…

To celebrate the release there is a special screening at the Prince Charles Cinema, on Mon 12 February, with cast and crew present, hosted by Eye For Film’s Anton Bitel.

Director Jane Spencer said: “I am absolutely thrilled that THE NINTH CLOUD is finally being released in its home. We shot the film in London and, although it has an international cast it carries a very British sensibility, inspired by some of the UK’s great independent films”.

Press pack (with interviews), screener link and check discs are available upon request