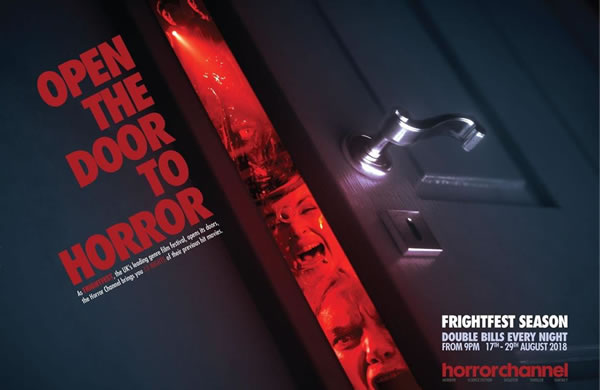 To celebrate FrightFest 2018, taking place in London during the August Bank Holiday, Horror Channel is dedicating thirteen nights to past festival hits.

Looking for fun experiences as counsellors at a European summer camp for children, four Americans never suspect their first experience abroad might be their last. For the rapid-fire spread of an extreme rage-inducing infection plunges the group into a dark vortex of horror and madness catapulting them into a race against time – and each other – to find the source of the mystery contagion and make it out alive.

Adam (Xavier Samuel) is artificially created with a revolutionary 3D printer by married research scientists. But when bodily malfunctions relegate him to the scrapheap, Adam faces nothing but aggression and violence from the world around him as he discovers the true nature of humanity. Told from the Monster’s perspective and showcasing a stunning performance by Twilight’s Xavier Samuel, this brilliant adaptation gives horror icon Tony Todd his best role in years as blind hobo Eddie.

It’s Ed and Sarah’s first night at their new home, an isolated farmhouse on the Scottish borders. This should be a new beginning away from their stressful London lives, and at first it is. But as darkness falls, Sarah suspects they’re not alone. Ed goes to investigate, and the evening quickly becomes a nightmare. It suddenly dawns on them they do not belong here, and they certainly aren’t welcome, either. A terrifying suspense thriller starring Pollyanna McIntosh.

Out celebrating a birthday, two couples decide to party in a foursome at a sex club. Finding all the fantasy dungeons already booked, they are offered the mysterious Room 18. But Room 18 has a dark history; the bed is haunted and once between the sheets, you can’t leave the mattress or you die. Plagued with frightening hallucinations across multi-dimensions, they must figure out the bed’s secrets before they are all doomed. A race against time begins in a gloriously gruesome gore-fest from the Let Her Out terror team.

Single mother Renee Morgan (Noomi Rapace) tries to keep her life together when she’s suddenly kidnapped by a mysterious organisation and held against her will in a sinister facility. Her captors insist they’re just conducting medical research, but to Renee and her fellow prisoners, it’s torture! Why are they pushing her to an extreme limit, way beyond being scared to death, and into another frightening realm altogether?

After almost drowning in a lake, Madison (Michelle Mylett) finds herself crippled for life by the trauma. Her dread intensifies when she’s continually haunted by a rancid ghostly entity trying to pull her into his dark aqua world. After watching her struggle for a year with the debilitating hydrophobia, Madison’s four best girlfriends attempt an unconventional intervention in which they accidentally open a floodgate to a sodden universe that puts all their lives in danger…

When former LAPD officer Brett Anderson takes a job as head of security at an old apartment building, he experiences a series of bizarre and terrifying events. Once he delves deeper into the building’s sinister history and investigates its shadowy owners and past employees, Brett soon uncovers a malevolent force nestled deep in its bowels that will do anything to be set free into our world. Starring horror icon Robert Englund.