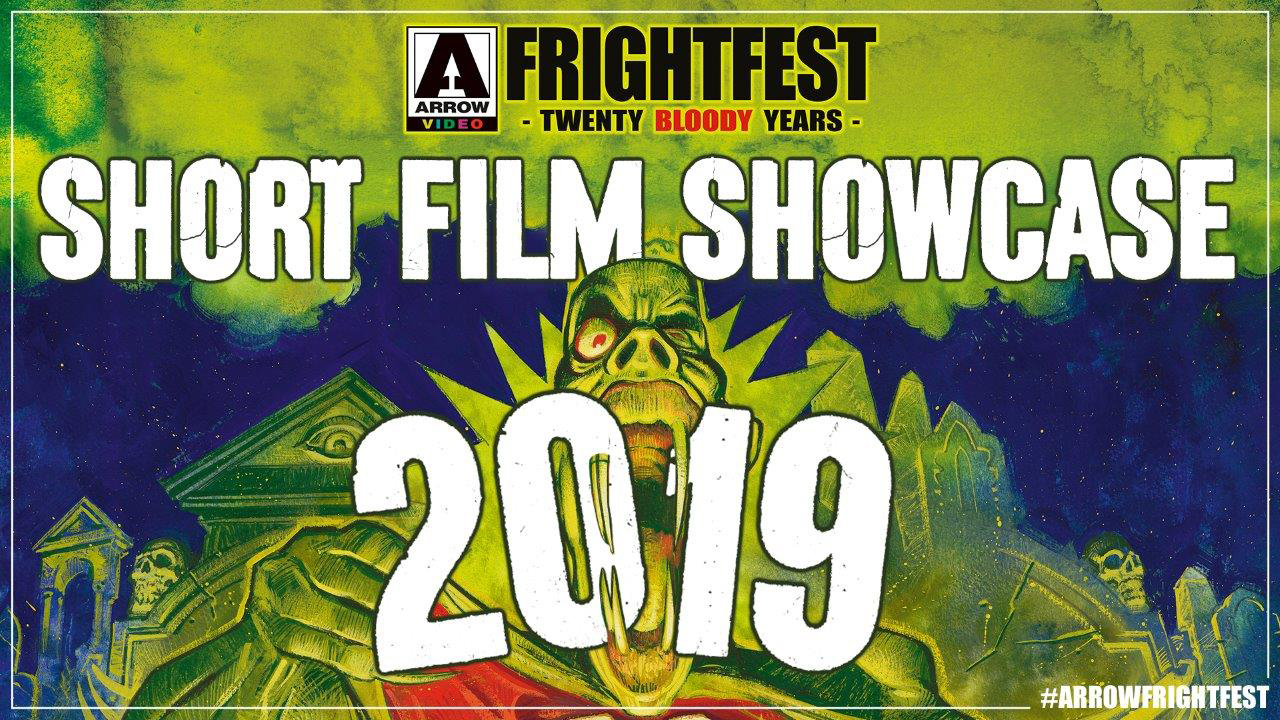 From unseen forces to dangerous desires, from the remorseful living to the remorseless dead, from under the earth to creepy closed doors, Arrow Video FrightFest 2019 continues the festival’s fine tradition of showcasing the best in global genre short filmmaking.

This year’s five continent selection unleashes the newest creations from both upcoming and established filmmakers and embraces a record fifteen UK films, seven spotlighted selections from Canada and a breakthrough entry from The United Arab Emirates.

Home-grown talent continues to energise the UK film industry, as reflected in this year’s entries. There’s Folk Horror (WITHER, MARIANNE) and Body Horror (THIS LITTLE DEATH, THE HISTORY OF NIPPLES), whilst lethal women lurk around every corner in SLEEP TIGHT, UNDER THE PARASOL and DOG SKIN. Katie Bonham returns with ticking terror thriller MIDNIGHT and Josefa Celestin is back with the darkly apocalyptic TOMORROW MIGHT BE THE DAY.  Another fearsome futuristic tale is OLD BEGINNINGS, while unseen danger lurks in THE GAME OF THE CLOCK and THE DEAD ONES starring Vinette Robinson. There’s also danger of the male predatory kind in PATRON, starring Far From The Madding Crowd’s Jamie Lee-Hill, and in THE CUNNING MAN (starring Games of Thrones’ Simon Armstrong and actor/magician Ali Cook), magic takes on a macabre  animalistic twist. And in the sinister SERVICE, you don’t always get what you’re trying to pay for…

Canada is a spotlight country this year, with seven stellar entries. Watch in horror as a scientific experiment test a couple’s relationship with food in FIVE COURSE MEAL, while two young women have a strange addiction and hobby in GLITTER’S WILD WOMEN. Isolation can bring out strange creatures in HUNTING SEASON but too many friends can bring trouble in ONE IN TWO PEOPLE. Some people take big risks to make a living in RE-POSSESSED HOMES, and the elderly find themselves at inadvertent risk in TORCHING THE DUSTIES. And you’ve never seen advertising quite like THE VIDEO STORE COMMERCIAL.

From other corners of the world, dangerous people roam the Australian highway in THE HITCHIKER, babysitting has its creepy drawbacks in Japanese entry HANA; from Finland comes ‘grave’ dangers in ABYSSUS and from the United Arab Emirates, a con artist picks the wrong house to conduct an exorcism in MAKR.

The US provides four gripping tales: Jill Gevargizian is back with ONE LAST MEAL, starring Matt Mercer, Izzy Lee directs THE OBLITERATION OF THE CHICKENS, hunger can get you into big trouble in TOE and psychopathic animal behaviour reaches a violent conclusion in PIG.

Programmer Shelagh Rowan-Legg said today, “I never cease to be amazed at the range and quality of short films we are fortunate to screen at Arrow Video FrightFest. The fantastic genres allow filmmakers to let their imaginations soar, and in our shorts programmes, you will see films that will delight and amaze, films that will make you laugh, a few that will make you cry, and several that will have you cowering in fear.”

Hana (London Premiere)
Director: Mai Nakanishi. Cast: Hee-jin Jeon, Do Eun Kim, Jeongbi Lee. Japan 2018. 13 min.
Not all babysitting jobs are alike, as college student Sujin is about to discover when she is left in charge of a strange young girl.

The Hitchhiker (European Premiere)
Director: Adele Vuko. Cast: Liv Hewson, Brooke Satchwell. Australia 2018. 13 min.
Jade and her friends are on their way to a music festival when they pick up a strange hitchhiker, who makes Jade an offer she might not be able to refuse.

The Dead Ones (European Premiere)
Director: Stefan Georgiou. Cast: Olivia Hallinan, Sebastian Armesto, Vinette Robinson. UK 2019. 19 min.
In this world, those whose lives are cut short by violence do not disappear; they live to haunt the person who killed them.

Abyssus (UK Premiere)
Director: Kim Westerlund. Cast: Sampo Sarkola. Finland 2019. 9 min.
A man regains consciousness as he is being buried alive. Overwhelmed by panic, he tries to force his way out of the box.

The Video Store Commercial (UK Premiere)
Director: Cody Kennedy. Cast: Joshua Lenner, Kevin Martin, Jesse Nash. Canada 2019. 4 min.
A desperate video store owner hires a crew to shoot a commercial in his shop. But when they accidentally destroy a cursed VHS, suddenly, all their lives are in danger.

The History of Nipples (World Premiere)
Director: Bailey Tom Bailey. Cast: Joseph Macnab, Lily Wood. UK 2019. 10 min.
‘What are my nipples for?’ With this question Ron falls into an existential crisis which seems to have only one solution.

One in Two People (European Premiere)
Director: Ali Mashayekhi. Cast: Katie Strain, Jade Hassoune, Ashley Leggat. Canada 2019. 8 min.
Emily’s friends are getting a bit tired of her insistence that someone in her room is trying to kill her. But maybe they should listen more closely.

Old Beginnings (London Premiere)
Director: Suni Khan. Cast: Hannah Arterton, Lewis Reeves. UK 2019. 16 min.
A young couple trying to rid themselves of the past use an unorthodox and bizarre ritual as they rekindle their love.

Tomorrow Might Be the Day (London Premiere)
Director: Josefa Celestin. Cast: Jocelyn Brassington, Tim Barrow. UK 2018. 20 min.
A fanatical believer sets into motion a chain of dark events that he believes will spare his rebellious niece from the impending apocalyptic doom.

Under the Parasol (London Premiere)
Director: Stanislava Buevich. Cast: Sarine Sofair, Joe Wredden. UK 2018. 6 min.
Marie comes to the beach to catch some sun. The only problem is that it’s nighttime…

Makr (UK Premiere)
Director: Hana Kazim. Cast: Mansoor Alfeeli, Mohammed Ahmed, Madiya Humaid. United Arab Emirates, 2018. 15 min.
A fake exorcist visits the home of a man who thinks his wife is possessed by a Djinn, only to find out that things are not as they seem.

The Obliteration of the Chickens (European Premiere)
Director: Izzy Lee. Cast: Bracken MacLeod. USA 2019. 3 min.
The universe does not care. The abyss is stupid. Existence is banal.

Re-Possessed Homes (UK Premiere)
Director: Matthew Evans Landry. Cast: Natalie Lisinksa, Jordan Gavaris. Canada 2018. 15 min.
Shirley Parker is a real-estate godsend who has discovered a niche market. However, it might put her family in some danger.

Hunting Season (European Premiere)
Director: Shannon Kohli. Cast: Hannah Levien, Luke Camilleri. Canada 2018. 11 min.
It’s a creepy evening when gas station attendant and recovering alcoholic Callie must deal with a wild beast roaming the area, and the men who are determined to hunt it down.

This Little Death (London Premiere)
Director: Alex Hardy. Cast: Sarah Bauer, Jay Simpson. UK 2018. 19 min.
Young chef Zoe who falls for Mortimer the poet. The beginning is filled with love, lust and laughter, but as the months pass, they realise they have very different ideas of happiness.

Toe (European Premiere)
Directors: Neal O’Bryan, Chad Thurman. Cast: Cassie Carey. USA 2019. 7 min.
A starving boy eats a toe he finds sticking out of the ground. Later that night, something ghastly comes to his bedroom wanting it back.

The Game of the Clock (UK Premiere)
Director: Michele Olivieri. Cast: Simone Mumford. UK 2018. 7 min.
A young woman innocently comes to a friend’s home, only to find herself stalked by menacing creature, and time is running out fast.