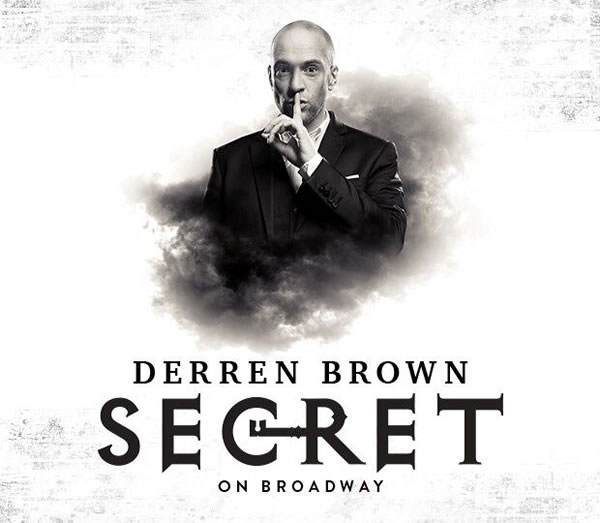 WILL OPEN ON BROADWAY THIS FALL
FOR A STRICTLY LIMITED ENGAGEMENT

June 13, 2019 – From stage to screen, two-time Olivier Award winner Derren Brown has mesmerized millions worldwide with his unique brand of mind reading, persuasion, and psychological illusion. Now, for the first time ever, this U.K. phenomenon and Netflix star brings his talents to Broadway.

Producers J.J. Abrams, Thomas Kail, and Jeffrey Seller announced today that after a sold-out, critically acclaimed run off-Broadway at the Atlantic Theater Company, Derren Brown: Secret returns with a spellbinding experience that dares us — in the most jaw-dropping way — to take a closer look at the stories and beliefs that guide our lives.

The production had its world premiere in 2017, where the acclaimed British performer and author played to sold-out houses at Atlantic Theater Company, and went on to win the 2018 Drama Desk Award for Unique Theatrical Experience. In the UK, Derren Brown’s critically acclaimed shows have played sold out runs in the West End and have been awarded two Olivier Awards.

Derren Brown: Secret is not suitable for children under 12.

Presale tickets to Derren Brown: Secret will then be available exclusively to Audience Rewards® members from Tuesday, June 25, 2019 at 10am EDT through Friday, June 28 at 9:59am EDT. It’s free and fast to join at www.AudienceRewards.com.

Audience Rewards® is the Official Rewards Program of Broadway & the Arts™. It’s a standing ovation for ticket buyers across the nation. Earn valuable ShowPoints every time you buy tickets to participating theatrical productions, live entertainment, and more. Save money by redeeming ShowPoints for free tickets to the events you love or, even better, securing unique experiences and merchandise exclusively curated for Audience Rewards® members.