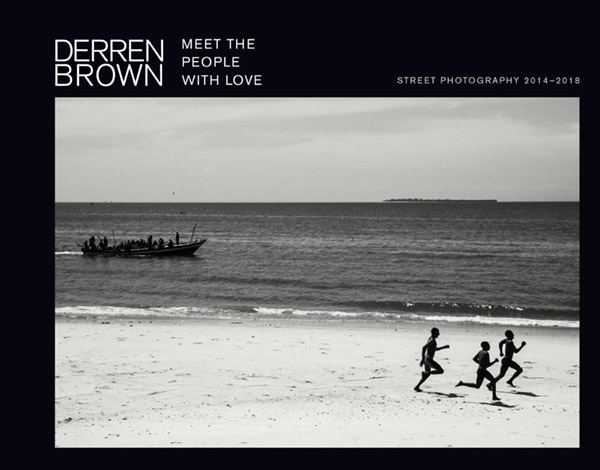 “Henri Cartier-Bresson (perhaps the most celebrated father of street photography and amongst the first to elevate it to an art) said somewhere that your first 10,000 pictures are your worst. So, given that I have probably taken about that many pictures in those few short years, I present in this book – a curated selection of what will become my worst pictures.” (Derren Brown)

As well as being an incredible stage performer, a brilliant writer and a talented painter, Derren Brown is also a dab hand at street photography. Here, for the first time, is a selection of some of his own self-selected personal favourites.

MEET THE PEOPLE WITH LOVE showcases one of Derren’s most abiding passions. He has lived with his Leica almost constantly by his side for the last four years, seeking out a soulful interplay of people and their surroundings. The result is a beautiful collection of images, evocative of the mid-century era of classical street photography. For him, the photographer’s challenge is to hint at the connection and suggest a narrative which can be imposed through the image.

As Derren comments: “One keeps an eye out for a particularly serendipitous arrangement of people and environment, and learns ways of securing one’s shot unobtrusively, The camera is an entry ticket to daunting social situations and extraordinary environments where we might otherwise feel entirely out of place. Suddenly we have a reason to be present. And for those of us smitten by its appeal, it provides a means of fortifying and forgetting ourselves, while extending out into the world with a controlled compassion.”

For Derren this form of photography is a kind of mindful activity, which he first describes in his best-selling book, HAPPY.

“When I am out with my camera, I am deeply interested in other people. I let myself be guided by them. There is a two thousand year-old Stoic maxim for happiness that says we should stop trying to control things we cannot, and instead move in easy accord with the flow of things. I tend to feel the camera as an extension of myself…and without looking through the lens I know, through experience, what the picture will include (so I don’t always need to bring the camera to my eyes), and when I am photographing in black and white I ‘see’ in black and white (which is a very different way of perceiving from colour).”

There are also links to his illusionist performances:

“Street photographers learn techniques to avoid being noticed, or to give the impression that they are photographing something else. However, a problem with any subterfuge is that it tends to forge a kind of guilt. Any magician knows this, and must learn not to telegraph this self-reproach during the trick. He has to relax at those crucial moments…”

Derren Brown began his UK television career in December 2000 with a series of specials called Mind Control. Since redefining the genre of magic for intelligent, modern audiences, he has become synonymous with the art of psychological manipulation. His TV shows, both for Channel 4 and, more recently Netflix, have become must see events. Amongst a varied and notorious career, Derren has played Russian Roulette on live television, convinced middle-managers to commit an armed robbery in the street, led the nation in a séance, stuck viewers to their sofas, successfully predicted the National Lottery, motivated a shy man to land a packed passenger plane at 30,000 feet, exposed psychic and faith-healing charlatans, and hypnotised a man to assassinate Stephen Fry. On top of this he tours the UK every year with a sell-out stage show. This is his fourth published book.