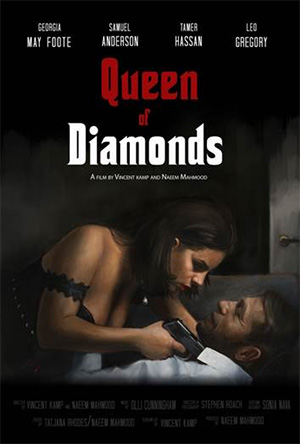 Vincent Kamp, known for his striking portraits of people in a fused background of cinematic lighting, brooding sexual tension and impending drama, is creating a series of paintings inspired by a short film he has written, co-directed and produced.

Heist thriller QUEEN OF DIAMONDS, is a collaboration between Kamp and filmmaker Naeem Mahmood (Brash Young Turks) and centres on an audacious plot to rob an international diamond trader. It stars Georgia May Foote, Tamer Hussan, Leo Gregory and Samuel Anderson.

Both the film and paintings will be on public display from Sept 12, 2019 at Clarendon Fine Art, Mayfair. The gallery then plans to host a national gallery tour.

Kamp commentated: I made this film to show how I visualise the story before I tell it with paint. My paintings have always been inspired by cinematographers and I felt it was time to take that creative influence to the next level”. 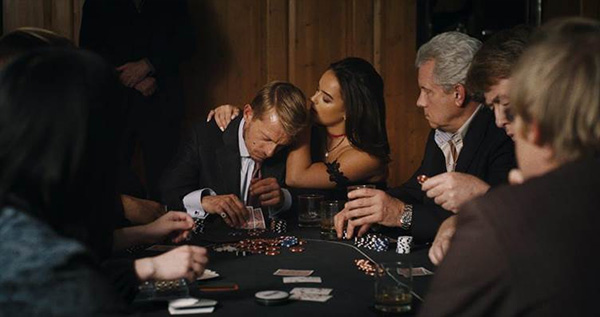 Georgia May Foote & Leo Gregory in QUEEN OF DIAMONDS

Surrey-born artist Vincent Kamp is acknowledged as one of the UK’s most evocative and exciting new painters. Fascinated by the dark, gritty underground world of urban subculture, his paintings delve beneath the surface of social class. Heavily influenced by cinema, particularly the crime and gangster genres, Kamp says he likes to capture a moment of high tension, always imagining there’s something surreptitious going on in what could be a perfectly innocent situation. Recent exhibitions include his Barbershop-inspired ‘FEAR AND LOATHING IN EAST LONDON series’, a celebration on the pianist/songwriter Ruben James and his band, and THE LONG GAME – an interactive solo show of thirty paintings depicting a gangland poker game that ends in an explosion of violence. He was named Artist of the Year 2017 by Talented Art Fair

Award-winning filmmaker Naeem Mahmood is one of the freshest directors to emerge in the UK – a graduate of the Berlinale Talent Campus and winner of the Prince’s Trust Millennium Award. His directorial feature debut BRASH YOUNG TURKS, released theatrically in the UK, was awarded Best UK Movie at the Movie Video & Screen Awards 2016. He has set up Trailblazer, a production company that works with young creatives with the aim to raise the bar of what British independent films can accomplish.