Ahead of the UK premiere of his latest film THE RECKONING, Neil Marshall talks about the desire for creative freedom, putting leading lady Charlotte Kirk through hell, his love for FrightFest and his urge to make something outrageously violent and bloodthirsty again.

THE RECKONING sees you returning to the horror genre. Was this an important factor in choosing to make the film?

Absolutely. After the nightmare of Hellboy, which was a deeply dissatisfying creative experience on so many levels – I’d originally been hired to bring a horror angle to Hellboy and was never allowed to do that – so I had an itch that needed scratching. I’d been wanting to do another horror movie for a while, and for various reasons, one of which was so I could bring something back to FrightFest, because I love this festival so much. It feels like coming home again. The whole festival scene is a buzz, getting to meet the horror fans and watch amazing movies you might otherwise not see, and I’ve really missed that. So I wanted to be a part of that again, but at the same time I wanted to do something different, creatively. If Hellboy had been a lot of money and no control, then this was totally the opposite; all the control I could want, but no money. But that felt like a decent compromise to me. This is the first true Neil Marshall movie since Centurion, or at least my segment of Tales of Halloween. And it’s both similar to what I’ve done before and very different. I wanted to stretch my legs a little as a filmmaker, try something more dramatic, maybe a little more artsy, and just have fun within the genre.

Was the subject of the Great Plague in 17th Century England something you’ve always been interested in?

I can’t say I’ve been hankering to do a 17th century plague movie all my life. The plague itself really just forms a backdrop to this story. Of course, when I was writing it I had no idea just how relevant the plague aspect was going to become!

Neil Marshall on the set with Charlotte Kirk

The more research I did, the more interconnected the stories became. I uncovered some fascinating details, like how people were so convinced the plague was the Devils work, and that witches were the Devil’s disciples, and cats were the witches familiars, so they started killing cats in their thousands, and this of course led to the further spread of rats which carried the plague. I love finding out stuff like that!

What also interested me was the witch hunt aspect to it, and how that was still very relevant to today. Witch hunts still exist, they’ve just taken on a different form.

From very early on, you collaborated closely with your partner Charlotte Kirk, who is magnificent in the leading role. Tell us how the collaborative process worked.

When we were first approached by my friend Ed Swindell (dir Dark Signal) with the bare bones of an idea about doing a witch movie, Charlotte and I had just finished writing our first script together, a gangster movie, and so we’d figured out our collaborative process pretty much by then, and it was a good one. I think Charlotte, coming from a very non-horror background, brings ideas to the table that I might not think of. For instance, it was Charlotte who first suggested the idea that there would be no witches in this witch movie, kind of approaching the idea from completely the opposite direction, and I loved that idea, but at the same time I like to keep certain things ambiguous, so between us we kind of met in the middle.

Also, for Charlotte, she was writing a role that she was going to play, and I think beyond the broad strokes she was happy to let me focus on the trials and tribulations of that character, knowing I wasn’t going to make it easy for her. She wanted to be challenged as an actor, so I made sure to put the character through hell! Overall, the entire process from writing to being on set together was a blast.

Her role as Evelyn is incredibly demanding, both physically and emotionally, and in a sense she emerges as a modern day heroine. Was it important to connect her story to a younger audience?

Women’s rights are at the forefront of people’s minds now, especially with the #metoo movement bringing such a spotlight on the abuse that woman are still facing today. 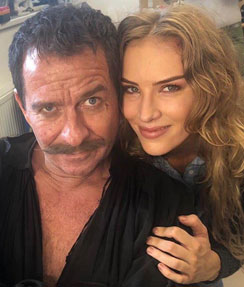 Those poor women who were persecuted in the 17th century were fundamentally no different. Over 500,000 of them were arrested and tortured for a crime that doesn’t really exist! It’s insane. It’s just men exerting their power, and that’s still what’s happening today. And, just like today, it’s born of fear. Certain men are afraid of women and they seek to control their fear by punishing and persecuting them.

Creating roles for strong and three-dimensional woman is a narrative weaving through most of your films. Do you think the horror genre naturally lends itself to your female story-telling instincts?

I think that the horror and sci-fi genres have always led the way in pushing new ideas and breaking through social boundaries. A lot of horror movies deal with the notion of survival, and over the years they took the old concept of the damsel in distress and turned it on its head. Women are incredibly tough and resilient. They have babies! So their pain threshold is, in a lot of cases, much higher than the average man. For this story and this character not only was I inspired by the women in the 17th century who underwent these appalling trials and tortures, most of them dying in the process. But also those brave women of the resistance in WWII who were captured and tortured by the Gestapo, and they resisted to the bitter end. So Charlotte and I set to out make Grace Haverstock as stubborn and resilient and fierce as she could possibly be, without ever making her fantastical. She’s not a super hero, she bleeds and she suffers in so many ways, both physically and psychologically, but she just keeps pushing on. So yea, I think the horror genre absolutely lends itself to explorations of female characters being pushed to the extreme. It allows us to take these characters to some pretty dark places!

Sean Pertwee is brilliantly chilling as Witchfinder Moorcroft. Was he always foremost in your mind when casting?

I think I always had Sean in my head for Moorcroft. The thing is, in reality Sean is such a kind, gentle, generous human soul, so the character of Moorcroft couldn’t be much further removed. I think that, like me exploring dark aspects of the human character through my movies, the same thing applies to actors like Sean. Playing Moorcroft allowed him to explore a very different and darker personality. What I really enjoyed exploring in The Reckoning was the very different ideologies of the villains. If Pendleton (Steve Waddington) is just an out-and-out sadist, then Moorcroft is a fanatic, driven by a fundamental belief that he’s doing righteous work. Even while he’s torturing Grace he sympathises with her. He sees her as a victim of evil, a vessel of the Devil. When she enduring the Pear of Anguish, which is kind of like childbirth in reverse, absolutely horrific, but Moorcroft is there, almost like a husband, weeping and holding her hand, as if sharing her pain. I love that he’s not just some one-dimensional moustache twirling villain. Although he does have a cracking moustache!

You have a very strong historical connection to FrightFest. Does that mean a lot to you?

As I said earlier, FrightFest feels like home to me. The four musketeers – Alan, Paul, Greg and Ian – have long been such strong supporters of my work and I’m eternally grateful for that. And I love that they are still completely hands-on with the running of the festival, this is their baby, and their passion for horror is always infectious. Of course, Covid has thrown us all a curveball this year and screwed up the live event, but the festival continues regardless, and fingers crossed, next year it will be back with a vengeance!

How have you been dealing with life under COVID?

You know, the thing I’ve missed more than anything is coming to the cinema. And where we live in LA few still can’t go, so we’ve been a bit jealous hearing about people in London getting to see Tenet on Imax! I’ve been waiting for that movie all year, and I still can’t see it, or anything else for that matter. So that’s a drag. Otherwise we’ve been using the time to get creative. Developing TV shows and trying to set movies to make once the crisis subsides. I’ve also just finished a new horror script that really takes me back to my roots – an action horror movie very much in the spirit of Dog Soldiers and The Descent. I feel the urge to make something outrageously violent and bloodthirsty again. It’s been too long!

Well, at the moment it’s looking like I could be doing either the new project or another horror project I’ve been developing for some time. I think I’m definitely back in the world of lower budget genre movies and I like being here, just so long as I can keep getting my movies made and keep the fans happy! It’s never been easy, but hopefully things will change for the better.