As Derren Brown prepares to take his show UNDERGROUND around the country in 2018, he tells us what makes him happy, reflects on the future of magic entertainment and reveals he’ll be back on our TV screens soon. 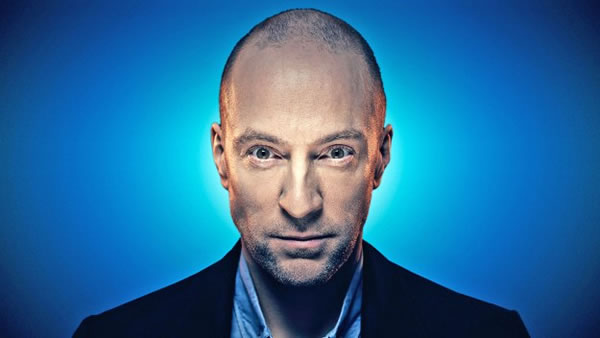 It’s great to see that UNDERGROUND will be back in UK theatres in 2018. For those who haven’t seen it yet, what can they expect?

DERREN: It began as a show to take abroad for people who hadn’t seen me. It is made up of all the best bits of the previous tours, put together to form a new show with its own stand-alone integrity. The result, everyone felt, was such a strong show that we decided to tour it here under the banner of a ‘best of’. The material has been re-envisioned and re-worked (and by its nature is different from night to night anyway). People who come after having seen those previous shows are telling me they are being caught out and surprised again, which is great to hear.

You’ve gone on record as saying UNDERGROUND has been the most rewarding show you’ve created. Can you tell us why?

DERREN: Firstly it’s all the best material. So nothing feels like filler: it’s the absolute favourite routines, been picked from 15 years of touring. That’s a great starting point. Then I get to re-work them as the performer I am now, for some of them that’s 15 years on. But perhaps above all I have worked this in more than any previous show. I took a different production of it out to NYC, and have performed it pretty much every night for ten months: it’s reached point of total comfort for me, where everything that could have gone wrong has gone wrong, every possibility has been explored, and it’s a total delight to go out and enjoy night after night.

2018 will mark the 15th year that you’ve consecutively toured with a live show. When you started out in 2003 did you ever imagine you’d establish this genuine and durable bond with the British theatre-going public?

DERREN: Ha – no not at all. Though I started off as a live performer, so I suppose it’s always been my first love. Any sort of magic is always better live than on TV so I’ve let the television work move into a very different area while keeping the mind-reading and so on for the stage. I’ve worked with the same couple of guys – Andy Nyman and Andrew O’Connor – for almost all of the shows, which is invaluable. We really understand what goes into a show and how to work together to make it happen. And how to make it over-deliver: to give you more than you expect. It’s been huge fun for us all to go back through the material, choose our favourites, and re-work them into a new and coherent show. We each have our own strengths and somehow they all come together to make a big bundle of joy.

In 2019, you’re planning to tour America with DERREN BROWN SECRET. Does this mean we won’t be seeing you perform in the UK that year?

DERREN: Quite possibly. Might be a bit much to do both in one year. But home is where the heart is and so on, so I won’t be gone for long.

Your SECRET show was a big success in New York, but why did you wait this long before taking a stage show abroad? And why do you think the time is right now?

DERREN: There are all sorts of grown-up considerations involved in getting a show together, on or off Broadway; you have to have investors and new producers and whatnot. It takes a while. I’ve barely done anything in the US over the years as I wanted to make sure I did it properly and in a way that was enjoyable. Going the stage route seemed to be the most fun option: I’ve always enjoyed stage more than TV. Talks had been going on between the grown-ups for some time and then one day it all came together. The weather was nice, it’s an extraordinary city, and I made some new friends. It was a delight.

You haven’t done a TV special for a while. Is there something in the pipeline?

DERREN: Yes – for Netflix. They are showing Miracle and The Push – two of my C4 shows – and right now I am making a brand new special for them. That’s been another interesting change – away from terrestrial TV into quite a different world. Channel 4 have been wonderful to me over the years and I hope we’ll do more together in the future: at the moment this is very exciting too.

Do you still have that desire to shock audiences?

DERREN: I’ve never aimed to shock for shock’s sake – such a thing isn’t that shocking at all. I try to find a strong dramatic hook, a good intelligent reason for doing it, and not pull any punches. Some of the shows have been ‘noisier’ than others: after ending the world for poor Steven in Apocalypse, I had a group of OAPs steal a painting from a gallery. So I try to stay interesting, make strong dramatic work, and let the shows grow up with me as my own interests change. I think that’s the best anyone can do.

The advantage of travelling so much has been the opportunity to focus on one of your abiding passions – street photography. How did you get started on that and tell us about the book you have coming out soon.

DERREN: Ah yes! This has been a passion for a few years now. Street photography is a kind of candid photography, out and about on the street, and has its own noble historical niche. When you’re well-known you get used to keeping your head down without even knowing you’re doing it: taking pictures has kept me more engaged. Plus I get bored and glum if I don’t have a creative project to work on: a camera is such a portable thing and keeps you very present and on your toes. I love it. A book with a bunch of my pictures and some words I’ve written about it should be coming out soon. Current title is Meet The People With Love.

Although your career has seen you go beyond the boundaries of conventional magic and pave the way for a new generation of performers, are you still a magician at heart?

DERREN: I’m not sure. I never want to show people tricks in real life. It’s a strangely childish preoccupation. Occasionally I see a great magic show – the last one was Derek DelGuadio’s In and Of Itself , a magic show of sorts in New York, and I get excited to be part of that world. But the things that used to delight me – card tricks and so on – tend to leave me cold nowadays. So I’m not sure where I’m at with it all. I’m just following my nose through it all and letting it take me wherever seems enjoyable.

Do you think the future of magic-inspired entertainment is in safe hands?

DERREN: I’m sure. More than anything we need to experience surprise when we watch magicians of any sort, so the performers who just offer minor variations of whomever is in vogue at the time won’t ever quite cut it. But every now and then someone comes along with a genuinely original vision and it’s all rather exciting again. There’ll always be new physics or technology we don’t quite understand that will prove to be a rich source of magical premises. At one point the new science of electricity was almost exclusively used by magicians for demonstrations. Next it’ll be quantum physics: it’s already used as a catch-all for The Law of Attraction and other New Age nonsense, because it sounds impressive and is sufficiently misunderstood. I’m sure a future wave of magi will find their home there.

Finally, you’ve inspired a lot of people with your book HAPPY but what truly makes you happy?

DERREN: Well, writing the book made me very happy. I think I’m at my happiest engaged in a project like that. Reading and writing for hours on my own makes me feel very good. Especially as I tend to do it most when I’m on tour, so I get to then go out and show off on stage for a couple of hours after being tucked away working. A big source of happiness is having meaning, and immersion in a creative project certainly offers that. And being outward- rather than inward-looking: letting your sense of self spread out and connect with others – or at least something outside yourself. I feel that strongly when I’ve been reading the right sort of book and then I step out into the street and feel all warm and gooey towards everyone. That’s the best feeling. It’s important for us to find our own ways of getting lost in something bigger than ourselves: that’s how we find meaning, and we are meaning-seeking creatures.