The FrightFest Guide to Grindhouse Movies
By Alan Jones 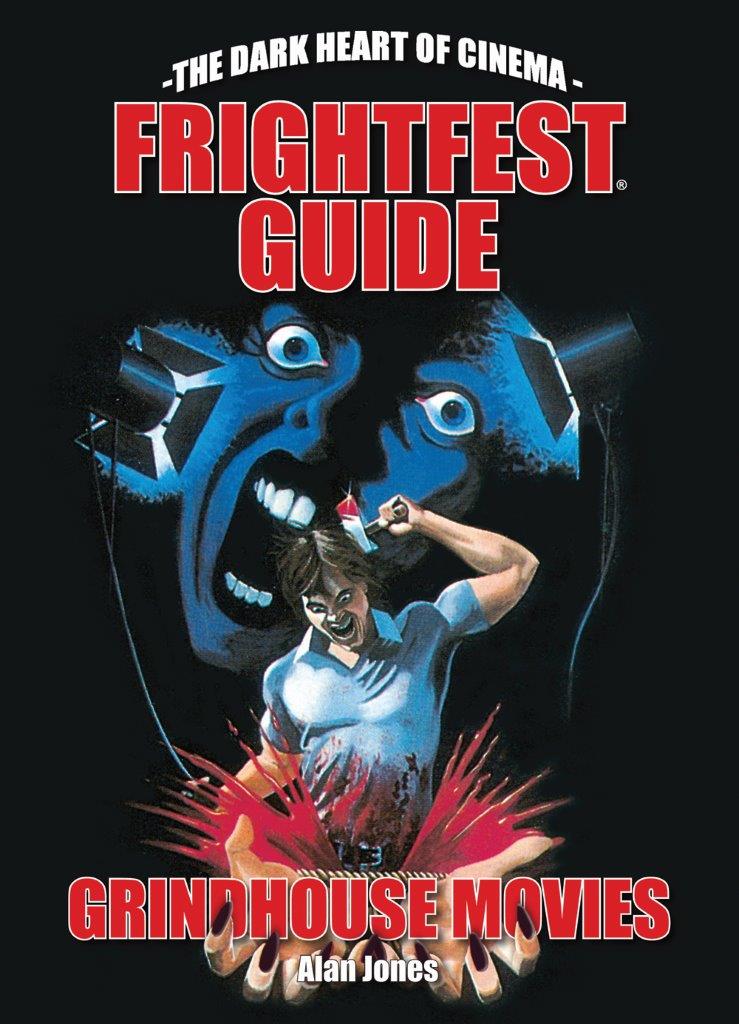 FrightFest and FAB Press once again join forces to launch THE FRIGHTFEST GUIDE TO GRINDHOUSE MOVIES, which goes exclusively on sale during Arrow Video FrightFest 2021, Aug 26 – Aug 30, The author, Alan Jones, will be present during the festival to sign copies.

Just when you thought it was safe to stop repeating “It’s only a movie… only a movie… only a movie!” it’s time to take a stroll down the dark and deviant back alleys of the Exploitation film industry. Your host, acclaimed film critic and broadcaster Alan Jones, returns with another mind-boggling trawl through the glittering gutters of cinema to uncover yet more obscure Grindhouse gold.

For this astounding sequel to his acclaimed FrightFest Guide to Exploitation Movies, Jones has chosen the most underrated, alluring or flat-out disastrous sick flicks from the eye-opening epoch that created an obsessed generation of slavering besotted fans. From red light district fleapits to neon-drenched 42nd Street dives and late night Drive-Ins, Jones forensically catalogued everything for posterity, pre-determining cult status even though he didn’t realise it at the time.

With a foreword by Jane Giles, the award-winning author of Scala Cinema 1978-1993, along with a highly personal, informative introduction by Jones, you can now take a walk on the wild side of chronic B-movie adoration, guided by the one person who knows the astonishing, once maligned, now lauded genre better than anyone else.

Jones reflected: “For sixteen years, from 1965 to 1981, I kept a yearly film diary of every Horror, Science Fiction, Sexploitation and Fantasy title I saw, where I saw it, in which cinema, on what date and exactly what I thought. It just so happened that this period coincided with the richest and grubbiest era in the Golden Age of Exploitation, with cheap thrills, seminal gore, full frontal nudity and taboo subject matters displayed across beyond belief marquees”.

Following the success of the previous four editions: The FrightFest Guide to Exploitation Movies, Monster Movies, Ghost Movies and Werewolf Movies, this is the latest in a series of wide appeal books for both the curious spectator and the cult connoisseur.

The exclusive launch of the book is at Arrow Video FrightFest 2021, with official signings taking place at Cineworld, Leicester Square on Friday 27 and Saturday 28 August. The FrightFest exclusive hardcover will be on sale for just £20 and people not attending in person won’t miss out as they have the option to pre-order the book from www.fabpress.com. Pre-ordered books will ship the first week of September.

THE AUTHOR — Alan Jones is an internationally renowned journalist and broadcaster, and is a co-founder and co-director of FrightFest. He has authored numerous books, including the FAB Press volumes Dario Argento: The Man, the Myths and the Magic, Nicolas Winding Refn: The Act of Seeing, and The FrightFest Guide to Exploitation Movies.

FOREWORD — Jane Giles was a programmer of London’s notorious Grindhouse venue the Scala Cinema, and is the author of the award-winning FAB Press book Scala Cinema 1978-1993

Since launching with its seminal publication Flesh And Blood (the source of the FAB acronym) in 1993, FAB Press, publishers of books for cult connoisseurs, has gained respect among its loyal customers and knowledgeable members of the book publishing industry alike. FAB Press has been working with FrightFest’s Alan Jones for many years, publishing his books Dario Argento: the Man, the Myths and the Magic, The FrightFest Guide to Exploitation Movies, and Nicolas Winding Refn: The Act of Seeing.