Italian musician and film director Federico Zampaglione has followed up on his well-received short movie BIANCA, with an even more horrific study of Italy under lockdown – BIANCA: PHASE 2. Again shot on his iPad in three days and starring his ten year old daughter alongside his current partner, actress Giglia Marra, Zampagione, who created, edited and produced the film single-handedly, has cast his former wife, actress Claudia Gerini in a cameo role and, obeying lockdown rules, involved only family members in the location roles – Marco and Giula Chermaz, his cousin and nephew respectively. 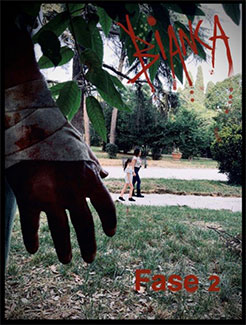 Synopsis: Phase 2 of the Italian lockdown has begun and Bianca (Linda Zampagilone) and her mother (Giglia Marra) decide to go to the reopened local park to enjoy their new found freedom in the sun. But an evil presence is stalking them and when Bianca is kidnapped, her mother enters a nightmare world trying to find and save her daughter from a terrible danger.

Here’s a link to a subtitled version.

And here’s a link to the first episode.

Federico said today: “This is the second episode of a planned trilogy, and the action has become more horror-oriented. The biggest challenge was making a beautiful Roman park look like a disturbing and creepy place. I had to make it look completely empty and desolate, so it was all about waiting for silence and using all the camera angles to avoid including other people in the frames.

One of the most interesting aspects to me, being a musician, was not using music that much. Instead I worked a lot on building up an increasingly unnerving atmosphere using mostly natural sounds, like birds, dog barking, weird animal noises, rather than the classic score”.