Ahead of the FrightFest World premiere of DON’T CLICK, director G-Hey Kim talks about the challenges of making her debut feature 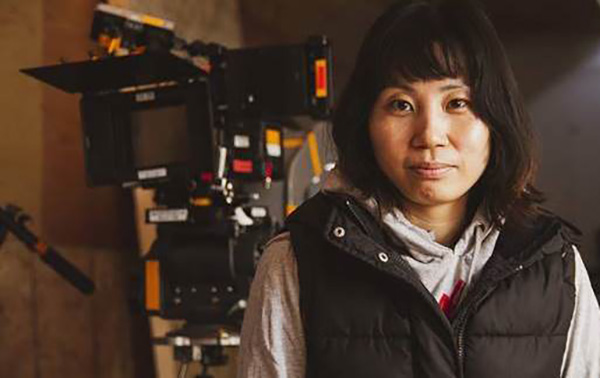 Your 2017 DON’T CLICK short was hugely successful on the festival circuit. Is that when you decided to expand it, or was that always the plan?

I never planned to extend my film because I never expected it to actually happen. Only a few short films have had the opportunity for a full feature version such as Saw (2004), Mama (2013) and Lights Out (2016). So I wasn’t expecting that my short film would ever get that chance. When I got a call from George Mihalka about creating a full length production of my film, I was very surprised and incredibly glad. From then on I began to think of my film as a full length feature

Was it difficult to think of ways to elongate the concept into feature length?

It would have been difficult without my amazing writer, Courtney. It’s hard to extend the plot of a short film without it dragging or feeling bloated. But Courtney was a fantastic writer. She understood the exact concept I was going for and knew the best way to get there. I enjoyed developing the story for the feature version with her.

Your executive producer is slasher royalty! How did you get George Mihalka (MY BLOODY VALENTINE) on board?

I may have had a bit of help in that regard, due to the fact that when I created my short film Don’t Click, it was as an assignment for a class that he was teaching. He was really impressed by the film and recommended I submit it to some festivals. He’s been a good mentor, helping me a lot to get this project off the ground. I’m so thankful I got the chance to work and learn from him.

Had you seen Valter Skarsgard in LORDS OF CHAOS? Did he jump at the chance to play Josh?

I hadn’t seen the film before his name was brought up during the casting meeting but after I had seen his work, I was convinced that he would be perfect for the role of Josh. We sent the script off to his agency and we were all incredibly pleased when word got back that he was interested. It was a huge relief because he was definitely the right person for the job.

You didn’t want to act in the feature like you did in the short?

Seeing as it was my first time as the director of a feature film, I wanted to make sure I was focused and wasn’t taking on more than I could handle. That’s why I decided to stay behind the camera this time as otherwise it could quickly become overwhelming. It turned out to be the right decision, but the experience that I had as an actor did come in handy while working on the feature film. It helped me to communicate with the actors, knowing what they were experiencing on the other side of the camera.

Websites, technology, the nasty side of the Internet, is DON’T CLICK a warning for our times?

Absolutely. Due to the ever evolving nature of technology and science, our lives are rapidly becoming more convenient. But we’re also facing new problems that we’ve never seen before, such as what I show in my film – the disconnection to criminal and pornographic violence when viewed over the Internet. It may feel like something that only happens in movies. But the online chatroom sex abuse case in South Korea was real. It’s time for us to really sit down and think about it.

What were the main challenges for you as director this time around?

As I mentioned before, it was my first time as a director of a feature film. I went from having a crew of 3 to having a crew of 45. It often made it difficult to communicate everything I needed to the right people. I made some mistakes, but luckily the crew I was working with were amazing people with lots of experience. They were experts in their fields and they always supported throughout the project. Not only the staff, but the actors were fantastic as well. The feature film is a well-made horror film thanks to their efforts, dedication, and passion.

The feature was shot in Canada and we are seeing so much talent emerging from that territory. Why is that, because it’s easier to fund genre pictures?

One of my favorite genres is horror. What I believe is that a director can make a film very well when he likes the genre and understands it fully. Ideas are popping up left and right and filmmakers here are clamoring to make them. Hopefully. this surge of talent continues, and helps Canada grow more and more on the global stage.

FrightFest is delighted to be hosting the World Premiere of DON’T CLICK at their virtual August event. What does that mean to you, and is it the perfect platform considering the subject matter?

Don’t Click is about the disconnect in the virtual world. So it’s meaningful to me to show it to the audience for the very first time through a virtual event. I think the audience may feel more scared watching at home alone on their laptop, just like the characters Josh and Zane did. They may find that on the internet, anyone can find themselves in Josh and Zane’s place.

The feature film Don’t Click was a great opportunity for me. I have learned a lot of things from it. I almost feel as though it were my first love. But now I need to think about my next step. I’ve been looking into making some short films and I’m currently shopping around some feature length scripts that I’m hoping will get picked up.