Ahead of his one-man show, Nicholas Vince reveals what’s behind the masks

You’re best known for your portrayal of the Chatterer Cenobite in Clive Barker’s Hellraiser and Kinski in Barker’s Nightbreed. What is it you remember most about playing these iconic monsters?

The many talented people and long processes involved in creating the makeups. I may have brought life to the characters, but it was the makeup artists (Nigel Booth on Chatterer, Cliff Wallace on Chatterer II and Neil Gorton on Kinski) who sculpted and painted them based on Clive Barker’s designs. Before we reached filming those guys spent weeks creating the masks.

Most of all I remember the laughter. OK, wearing Chatterer was extremely restrictive in terms of seeing, hearing and speaking, and Kinski was early starts and 5 hours in makeup, but there was a great atmosphere on all the films. In fact on Hellraiser I was threatened with death by the sound engineer as my laughter in the dressing room was ruining takes on the nearby set.

How did you first become attracted to monsters?

Aged eight I borrowed a copy of The Golden Treasury of Myths and Legends by Anne Terry White from the local library. It contained stories from Greek, Norse, Celtic, French and Persian myths and legends. I must have run out of time to read all the stories as I clearly remember the Greek and Norse stories, and less so the ones at the back of the book. Obviously, the stories are written about the heroes, but they interested me far less than the Minotaur, Medusa and Sphinx.

You were born undershot and had to have major surgery aged nineteen. Can you describe the experience for us?

Basically, I was born with a smaller than usual top jaw meaning my upper teeth closed behind my lower, rather than the other way round, which is normal. The surgery lasted nine hours, during which they detached the upper jaw and using pieces of bones from my hips as wedges moved it forward. It was a pretty trying experience as I was in intensive care for two days afterwards, during which I nearly died. Following that I had my jaws wired together for six weeks. Mum served my portion of family meals on a plate to check I was getting enough and then liquidised it. I remember fish and chips required a lot of salad cream so that I could suck it through a straw. 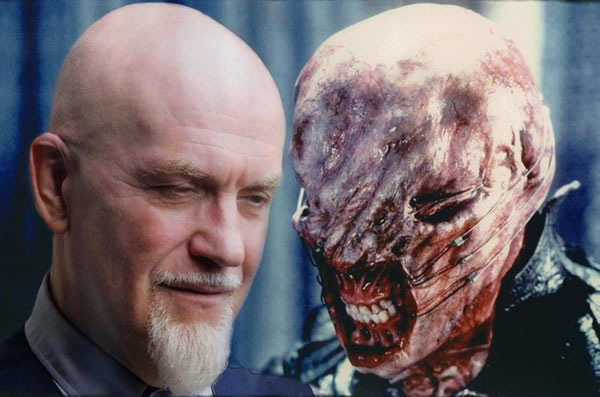 In your one-man show you talk about being gay but remaining closeted during the 70s. How did this impact on your relationships?

Once I’d moved away from home, I was able to come out to close friends, but not my parents. That didn’t happen until my mid-thirties. I do regret that as they were very loving and when a relationship fell apart with a boyfriend, it meant I missed out on their support. And not being completely out, by which I mean just keeping quiet about relationships, being an apparent loner, it complicated my friendships with good looking straight men, as I was afraid if they realised I fancied them they’d either cut me off or beat me up.

How did you meet Clive Barker?

At a party in Crouch End. We got chatting and he invited me to model for him as he was preparing paintings for the covers of the UK hardback versions of his six volume collection, The Books of Blood. So my face, and other parts of me, appear on the covers of most of the books in that edition.

Yes. I’d told Clive about a documentary I’d seen about facial reconstructive surgery where they’d obviously used a similar technique to my surgeons, as the only cut was between my upper lip and gum and they’d peeled the face back so they could detach the upper jaw. The flesh of the face was held in place by clamps, much like Chatterer. 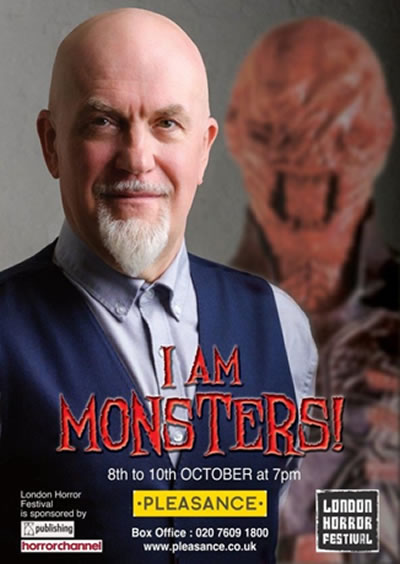 To play the Chatterer, you had to wear a mask and makeup that were extremely restrictive. How challenging was that?

I could only see a portion of the floor through a small hole below my left eye; had false teeth in so speech was like having my hands shoved in my mouth and muffled hearing due to the foam latex mask. So, I had a minder with me at all times leading me onto set holding hands, like a toddler and then they had to relay instructions from behind camera by shouting through the mask. The costume was very tight fitting as they’d taken a life cast of my torso so it could be made as close fitting as possible. I could only lift my arms to shoulder height.

Someone recently complimented me on my ‘meticulous performance’ and I realised that’s one of the strengths of Chatterer. We could only do short sequences with me as I had to learn my moves quickly and I worked hard to replicate them accurately, but that stillness and precision give him a great deal of power.

And the make-up for Kinski in Nightbreed was reported to take two people five hours to apply. Is that true?

Yes, up at 3am for a car from Streatham to Pinewood for 4am and the makeup chair for five hours. But I just had to sit still for that time. The two guys who applied it, Neil and Mark, were on their feet all that time making sure the pieces were properly applied and you couldn’t see the edges. I wasn’t allowed to fall asleep, so they had a VHS player and I remember watching Steve Martin and John Candy in ‘Planes, Trains and Automobiles. Which was frustrating as I also wasn’t allowed to laugh either!

You left acting after Nightbreed to concentrate on writing comics for Marvel and collections of short horror stories. What is it about the writing process you find so alluring?

It’s the fun of telling stories and talking to readers. In many ways it’s more challenging than acting as there you have a script and you’re putting the flesh on the bones, but with writing you’re faced with the sometimes terrifying wastes of a blank page. I remember Peter Atkins, the screenwriter of Hellbound: Hellraiser II, telling me when I first started writing, “Nick, there will be a time, at least once a day, when you’ll wonder why you ever thought you can write.”

He was right and the only way I’ve found to get through it is to do research, which as a writer said at literary event the other day can be, “Research, bordering on procrastination.” And then it’s just a question of writing something, anything, as you can polish it.

And I guess the allure for me, is that I get to get some of the really weird stuff in my head out and into the world.

In recent years you’ve returned to acting in UK independent horror films, such as Hollower (dir. MJ Dixon), Book of Monsters (dir. Stewart Sparke), Borley Rectory (dir. Ashley Thorpe) and For We Are Many (Lawrie Brewster and Paddy Murphy). Do you have further roles in the pipeline?

There are a couple, but I’m waiting for them to be released before I can talk about them. I did do an interview for the extras on the Arrow Video release of the theatrical and director’s cuts of Nightbreed, which they’re releasing on 28th October, and which is available for pre-order. I believe this is the first UK release of the film since the VHS version back in the 1990’s.

Do you have any other plans for I AM MONSTERS! after its premiere at the London Horror Festival?

People have been very interested in the show and I’ve had enquiries about taking it to Liverpool and Las Vegas. Both of which would be really cool, as Liverpool is Clive’s home town and I’ve never been to Vegas.

Nicholas will be opening the London Horror Festival 2019 with his one-man show I AM MONSTERS!, from 8th to 10th October (7pm) at the Pleasance Theatre.